The first community-run, asynchronous conference on the future of humanity, technology, and business in a decentralized world.

This is not your typical crypto bro talk. But an invitation to go deeper, (un)learn critically, and play—in an exploration of the potentials and pitfalls of Web3 alongside 25 experts from business, tech, creative industry, public policy, academia, media, and the arts, over the course of 20 weeks. Join at your own pace. Drop in anytime. Consider it a serendipitous, FOMO-free journey in the best company. Hosted on the Houseverse, powered by Discord.

In partnership with global PR and communications consultancy Hotwire, the House of Beautiful Business community was set to explore current ideas, principles, and business models for building a more inclusive, equitable, sustainable—in one word, more beautiful—paradigm for the internet. 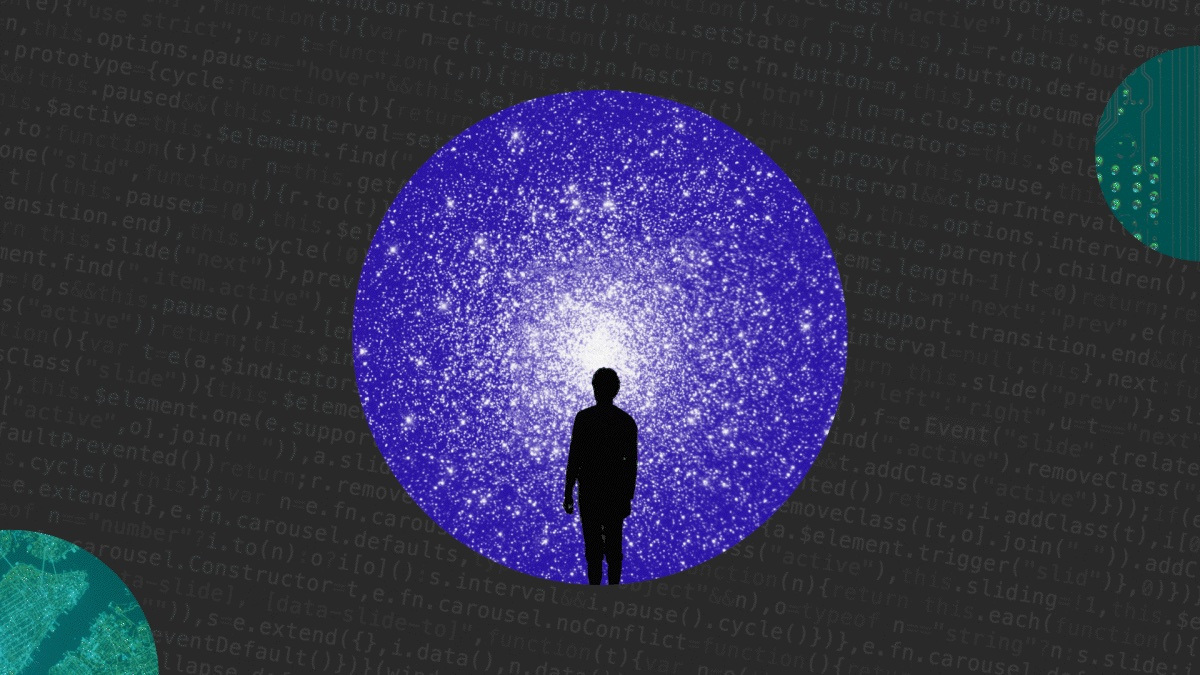 Settle in, meet fellow travelers, and get ready for a 20-week-long collaborative learning journey brought to you by the House of Beautiful Business in collaboration with Hotwire.

Maslow on the chain: which fundamental human needs, desires, and behaviors are rooted in the Web3 environment, and which initial trends across technology, society, and business are emerging? David Mattin, writer of the weekly newsletter New World Same Humans has a message for us.

Speculations, investments, hype memes. What are the key possibilities for an internet based on decentralized value, token-based economics, and the blockchain? Join a critical exploration into the evolution of technology with Greg Sherwin, former VP of Engineering of Singularity University and expert on human-centered technology; the effects of crypto and blockchain innovations on real world environments, with social scientist and researcher Alexia Maddox; and the newly required skills and mindsets for future leaders, with Will Fan, co-founder and CEO of modern business school NewCampus, based out of Singapore.

Phygital, Interoperable, Immersive: Visions for the Metaverse | Part One

Where will it live, and more importantly: how will we enter, socialize, and work? How will this new interface change our understanding of space, time (well) spent, and the amorphous blend of human-technology-interactions. First, let’s dive into Mark Rolston’s vision; the founder and chief creative of argodesign perceives the metaverse as a way to use the world as our foundational interface for computing—and a leap forward into a fully augmented future reality.

Then, venture into entirely new virtual worlds of extended brand experiences, from showrooms to conferences, designed and brought to life by Journee–The Metaverse Company. Ida Kymmer, Christian Mio Loclair, and Thomas Johann Lorenz invite you to see—and feel—what a beautiful internet has to offer. 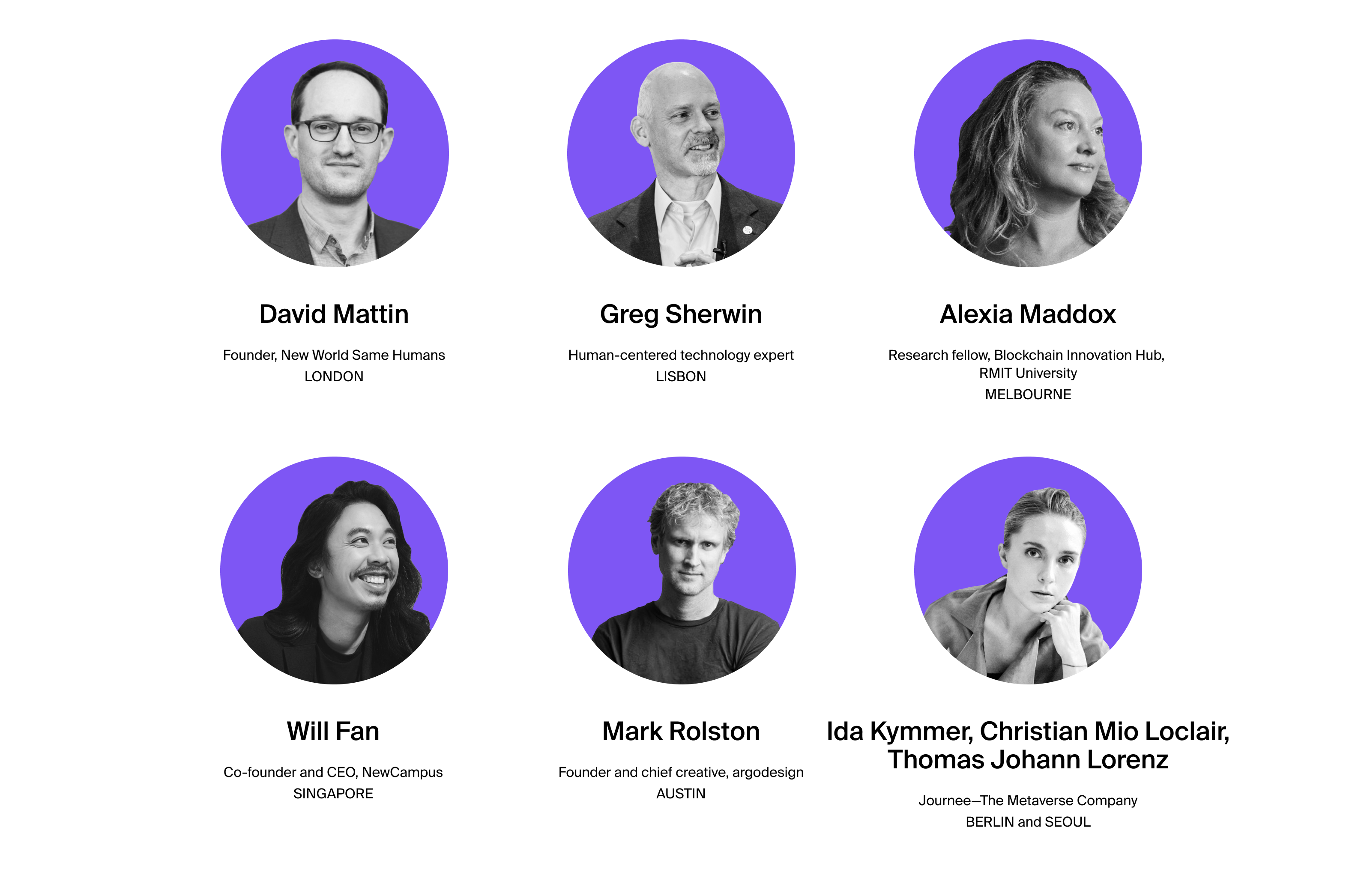 Hypebeasts, Pop Culture, and the Sneakerverse: Know Your Audience

How do you foster meaningful and sustainable relationships with your consumer along Web3 opportunities? One way might be through converging real life, virtual worlds, and games: learn more in a conversation with Ryan Mullins, CEO of Aglet, a location-based gamified Web 3 commerce experience, where sneaker aficionados can collect virtual and real sneakers in-game by traversing cities around the globe. And what is the larger undertaking for brands in stretching across possibilities between NFT collections and sustainability demands? Join a discussion with Sasha Wallinger, who’s pioneered new ways of connecting brands with consumers in-house at brands such as H&M, Nike, SOREL, Superplastic, and heads Web3 and metaverse strategy at Journey.

Crypto, Crypto, Who Will Regulate You After All?

With the recent collapse of the upstart crypto market costing investors billions in wealth, the necessity for legislation and regulation is increasingly demanded—so where do we stand, and how will we tackle insider trading, disclosure failures, and investor-protection issues? Luiza Castro will map out the current state, drawing from her experiences in corporate, civil, regulatory, and international law across Europe, Latin America, and the U.S.

Me, Myself, and My Avatar: Identity and Identification

In the Web3 world, you can be anyone—and anything you want. But first, let’s get the baseline right and ensure that the diverse range of identities and communities are being represented as they are in the real world. Join a discussion with Forward31 designer Mikha Makhoulon his latest research on avatar ecosystems and self-expression for a new venture, and learn about new possibilities for control, authentication, and provenance of self-sovereign identification with Andreas Toelke, head of fintech and digital trust at Swisscom.

If we truly aspire to make the internet—and the world—a more beautiful one, whose voices and stories will be represented and empowered through a new collective power of community, in alignment with more equitable access to social and economic justice? Explore the potential of NFT movements like WomenWeb3 by Joana Lacerda, aiming to bring more women, trans, and non-binary people to the Web3 space; Women Rise by Maliha Abidi, advocating for womens’ rights, gender equality, and education for girls and marginalized communities; and Ancient Warriors NFT by Emmanuel Udotong, featuring historically underrepresented cultures from across the African and Latin American continent. The Value of Art, the Art of Value

If art is a vehicle for creating awareness of the global tipping points of our times, how might NFTs as artistic expressions and commercial assets change the game? From poverty to fake news, Beijing-based art duo Chow & Lin, Stefen Chow and Hui-Yi Lin, address social issues through statistical and computational techniques, merging their expertise in visual art and market economics. Ponder the tricky questions of our times alongside their first NFT project, Decentralized Value Systems—in the form of Chinese steamed buns (“mantou”).

Real-Life Impact, One NFT at a Time

How will fundraising for social impact projects change, considering the possibilities of the NFT movement, and access to new communities? Actually People is a platform dedicated to elevating exactly this: by connecting artists, communities, and impact projects in crisis zones around the world that use art as a weapon of mass construction. Hear more from founder and social impact strategist Laura François herself.

Goodbye corporate consulting and university programs: enabled by Web3, Kerem Alper, co-founder of ATÖLYE, will discuss his latest venture, Neol, a decentralized collaboration platform targeting design and creative professionals, as well as corporate innovation managers, to share skills, talent, and resources in a new approach to solving the big issues of our time.

The End of Hierarchy: DAOs

In the absence of central leadership and governance comes self-sovereignty—for the individual and organizations at large. With data-driven business models dominating the current Web2 platform economy, how might smart-contract-based communities like DAOs democratize and create new ethical ways to monetize data? Learn all about voting rights, decentralized decisions, and an ecosystem of data unions with Marlene Ronstedt, co-founder, Data Union DAO, and play with the idea of creating a meaningful DAO yourself with Nishant Bhaskar, co-founder and CEO of Lomads.

Let’s Get Into It: Web3 Here We Come

Enough debating, speculating, and hypothesizing: let’s set up a wallet, earn some tokens, and vote like a DAO would. This week is all about: try, fail, and play! 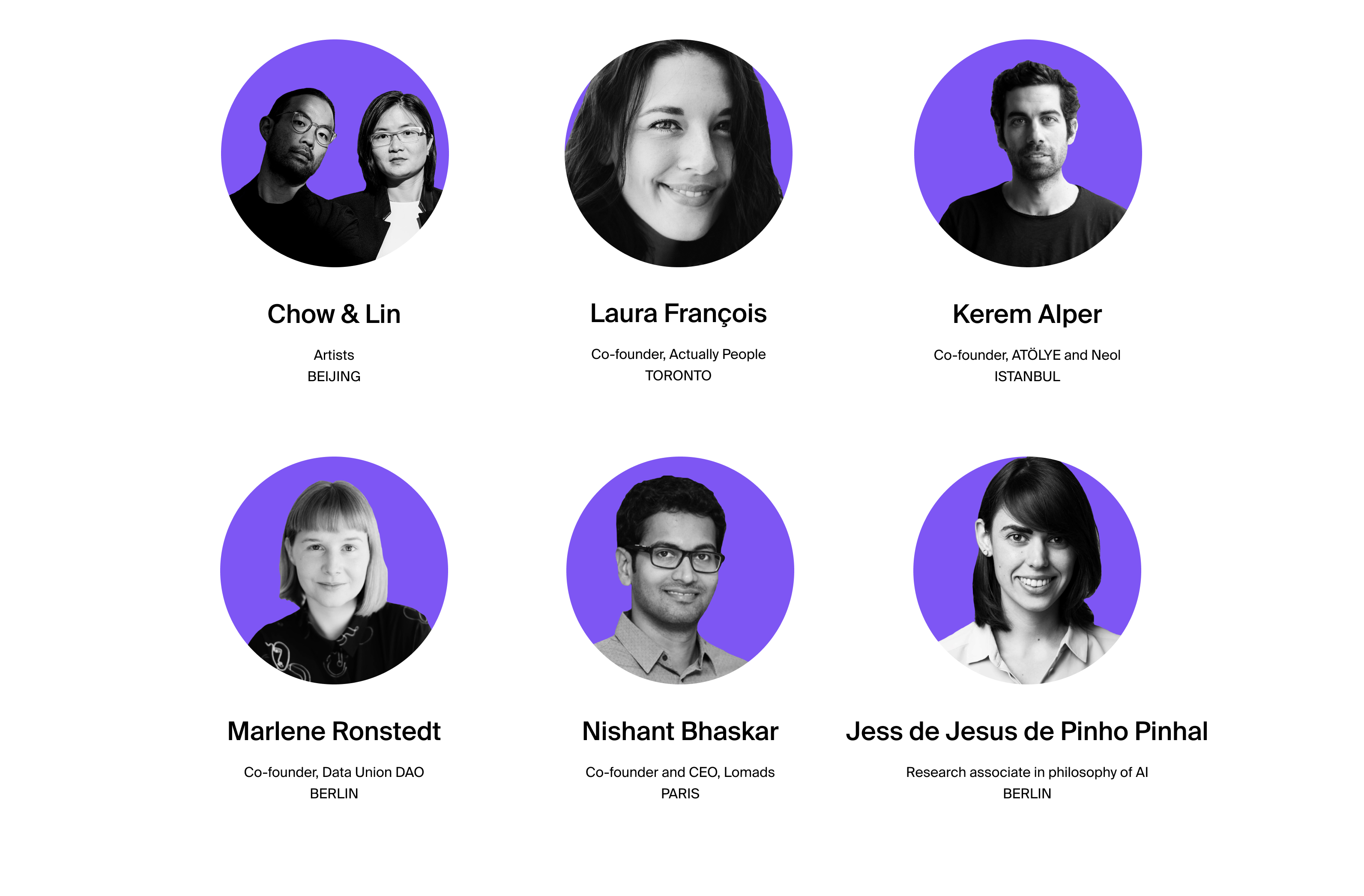 But Is There Still Time To Make It More Ethical?

They say history repeats itself, and yet, there’s cause for optimism, that we’ll learn from the mistakes and false promises of Web2. So how are we addressing the issues built into the current digital infrastructure, and what policies are needed to build for an ethically conscious and sustainable shift, built for inclusivity and intersectionality? Wrestle with tough questions alongside Jess de Jesus de Pinho Pinhal, philosopher and computer scientist, leading the Ethics Lab at Technical University Berlin, and Micaela Mantegna, video game lawyer and affiliate at the Berkman Klein Institute for Internet & Society at Harvard University.

Acceptably Sustainable? Or Climate-Positive, Too?

Amid a looming energy crisis and climate emergency, resource-intensive blockchain technologies are under scrutiny, and rightly so. With the most popular solutions, Bitcoin and Etherium, relying on “proof-of-work” and consuming colossal amounts of energy, the switch to renewable, less energy-intensive solutions are becoming increasingly important. Who’s leading the way in carbon-neutral blockchain technology? Let’s dive into it with Rica Amaral, co-founder, Positiveblockchain.io and Annabelle Low, venture builder and director of strategic development, Project Ark.

While most of us agree that the era of Big Tech is one to be left behind, the reality of an actual departure from those dominating the Web2 space is more bitter than sweet—and arguably, largely theoretical. With the rise of techno-optimism promising the ultimate deplatformization and thus, participation and democratization for all–it sounds a little too good to be true; and more importantly, like the early 1990s and the vision for the first World Wide Web. Analyze with Kevin Dulaney, executive VP of Technology, Hotwire, sociotechnologist Jürgen Geuter, and others.

Almost there. Let’s get together with as many of you as possible and reflect on what we’ve learned, which questions remain unanswered, and what new networks have emerged.

Here we are. After many weeks of augmenting ourselves in the fantastically complex beginnings of Web3, it’s time to look in the mirror: what has changed? What have we learned? How will we, as humans, social beings, interact in the virtual-physical space we’re building? Let’s rewind to move forward, with Dirk von Gehlen, director at the Süddeutscher Verlag’s digital think tank, the SZ Institute, and a journalist writing about the effects of digital transformation on culture, society, and business.

Stay with Web3 and Beautiful Business

HODL to the moments spent together—and perhaps make a meme, uh, mint an NFT out of it? We gather one last time to reflect and move forward, in keeping with the principles of our Web3 exploration, and what it means to be a beautiful business!