Back to Sovereign Nature

Can blockchain help us overcome the anthropocene?

Is nature intelligent? When I observea river carving its course to the sea, or learn about complex soil ecosystems bursting with millions of microbes, I certainly feel as if it is. Especially when compared to, say, a supermarket.

However in Germany, where I live, supermarket chains like Lidl are considered legal persons, whereas lakes and soil are not. Last year, the Magpie River in Canada was granted “legal personhood.” This gives it the right to flow, the right to be safe from pollution, and the right to sue in court. In Ecuador, the rights of nature have been guaranteed by the constitution since 2008. Any person, whether a citizen or not, can file a complaint on nature’s behalf.

In the book Braiding Sweetgrass, Robin Wall Kimmerer explores how the objectification of nature is encoded in the grammar of the English language. In the Potawatomi language of Kimmerer’s grandfather, “a bird flies” uses a different verb than “an airplane flies” to distinguish that which possesses life and that which doesn’t. “Birds, bugs, and berries are spoken of with the same respectful grammar as humans are, as if we were all members of the same family. Because we are,” she says. Instead of referring to non-human nature as “it,” she proposes an alternative pronoun: ki, or in plural form; kin.

The objectification of nature as a resource for human exploitation started in Europe’s colonial era and is deeply rooted in the dominant philosophies of the time. The result is a web of policy and marketplace norms which shape our shared reality today, where non-human nature is only seen as having ‘value’ when it is turned into a resource for human use. In 2021, the UK government published an independent, global review on the economics of biodiversity. The Dasgupta Review argued that nature is an asset, just as produced capital (roads, buildings, and factories) and human capital (health, knowledge, and skills) are assets. Collectively, says the report, we have failed to manage our global portfolio of assets sustainably, leading to increased human prosperity at the great cost of our natural assets. The solution, it proposes, is to transform the systems that underpin our engagements with the natural world.

So what if all our non-human kin could not only be protected, but actively participate in the economy? The CEO of Sovereign Nature Initiative (SNI), Catherine Bischoff, speaks of “hijacking capitalism” to give nature a value in today’s modern marketplace, and unleash the capital needed to conserve and regenerate ecosystems. The mission of SNI is to provide funding, consultancy, and exposure to projects that are reconceptualizing the relationship between humans, economy, and nature by, for example, mapping living ecosystems in a blockchain, generating NFTs for plants, or creating a forest cryptocurrency.

The organization hopes that by harnessing emerging tech these projects will challenge the human/nature binary and give birth to new ways of organizing economies that are founded on an entirely different philosophy, one that acknowledges the animacy of non-human life. In their Hackathon Challenge last summer, one team developed an app where NFTs of rare insects found in public parks and green spaces are traded as collectables, to incentivize biodiversity conservation. This year, they are running a Web3 creative writing competition where winning works of prose or poetry imagining a non-human perspective will be sold as NFTs.

The question is: Is this idea of sovereign nature the antidote to the anthropocene or a new form of exploitation?

I had an opportunity to speak with Catherine Bischoff about why she finds an autonomous and profitable nature a radical and exciting possibility. You can read a slightly edited version of our email conversation below.

A conversation with Catherine Bischoff, CEO of Sovereign Nature Initiative

I’m interested in how you moved from community building and tech as chief relationship officer at Factory Berlin, a startup incubator and co-working space, to becoming the CEO of an organization with the mission to rebalance and transform the relationship between humans and nature. We all know about the science of climate change and the urgency to act, but what convinced you personally that this was a necessary next step?

Over the last four years I had the incredible opportunity of building a multifaceted community at Factory Berlin and growing a vast network of entrepreneurs, investors, and creatives across the globe. But I also became aware of the many inequalities that we have in tech that couldn’t be addressed where I sat. In 2018 I started a program for female and underrepresented founders called Stealth Mode, which seeks to bring better access to networks, and investors to aspiring entrepreneurs. I became more and more aware of larger issues about climate that weren’t even on the table. Despite my work on various boards of sustainability orgs, I knew I wanted to get into something with impact.

I first heard about the basic principles behind the Sovereign Nature Initiative back in 2019 when I was moderating a blockchain panel at an event in Amsterdam, and I was completely flabbergasted. The ideas felt fresh, audacious, utopian-scary, and exciting! This was a chance to immerse myself in a new ecosystem and bring my values and network to a space that needed me. I took the leap.

I’m now thrilled to be working with a small talented team of people deeply dedicated to nature. They’re welcoming me into a world that is more radical, conceptual, philosophical, and futuristic, than anything I’ve done before. This leap of faith has meant I’m now happily in the heart of a paradigm shift.

A point of continuity with my work at Factory Berlin is community cultivation and helping incubate ideas and projects, and this time with a far more complex and ambitious organization than anything I’ve been involved with before.


What does “giving nature sovereignty” mean to you? What are the impacts of nature suffering from a lack of sovereignty?

Sovereignty from SNI’s perspective means to be in control, to possess independent authority, and the power to govern oneself. The goal of the foundation is to find ways to acknowledge and activate nature’s sovereignty.

At the same time, we feel it’s important to note that it’s not up to us humans to ‘give’ nature sovereignty. Part of our hope is to discover the sovereignty nature already has, which is to say power, or ultimate authority. When we begin to think of ourselves as part of nature and to respect nature’s authority, power, and value in itself, it can lead us to new, less human-centric ways of thinking about sustainability and ecology. 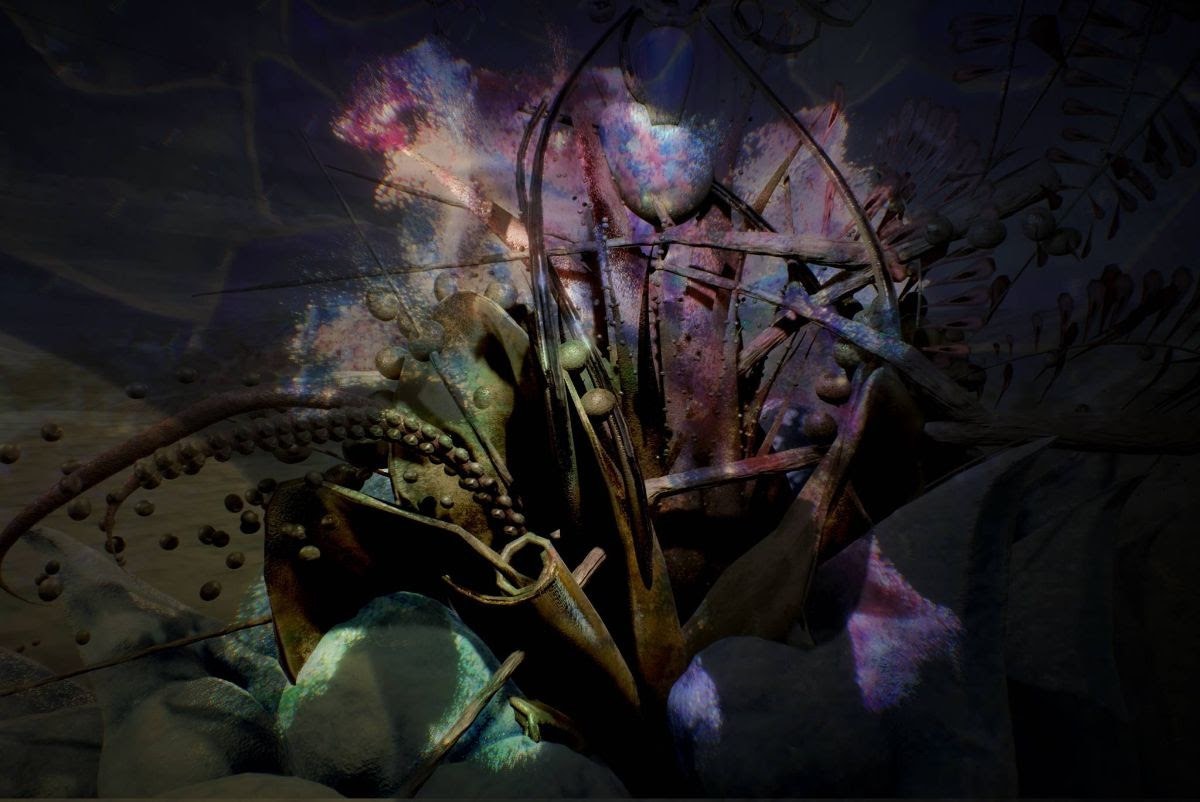 Ent-, an exhibition exploring the entanglement of humans and their ecosystems by Libby Heaney

Why are new technologies the vehicle we should be using to address the climate crisis?


We are experimenting. We feel we need to use every idea in front of us, including reducing waste and carbon footprints, but also innovative technologies. Artificial intelligence and blockchain can help organize systems of value and governance to incentivize the biodiversity and thriving of nature and ecosystems on earth. And, as our world grows more digital, we believe that a connection to and empathy for nature will become more and more critical.

Recently a friend told me that since he’s become an owner of VR glasses he has developed an intense appreciation for the natural world, because he’s “traveled there” through this technology. At first I was put off and thought, why can’t he go to the outskirts of Berlin to appreciate some of that, and not rely on tech to produce such a feeling? But what he meant was he’d become sensitive towards the kinds of ecosystems that he will likely never experience in his lifetime. On a super professional level, artists like Marshmallow Laser Feast use fully immersive virtual reality to convey very important environmental messages and create a deeper sense of empathy for nature.

We're also working with Nature Cognita, an organization experimenting with using plants to produce electricity to power environmental sensors that gather info on the health of the plant. The function of their engine is to generate a digital representation of a plant, which also means that nature can act as an artist by generating living NFTs that become a tradable asset and represent the value of the plant as long as it is alive and being cared for.

So my thinking has evolved here, and now I say let’s leverage tech for good, and see what AI, blockchain, and digital realms can provide natural points of view in new ways, and help us experience, appreciate and remunerate nature. I believe that tech can be used to beautifully immerse humans into a non-human, living world.

The SNI mission strikes me as quite philosophical and even political, for example your website talks about developing new ways of thinking about nature that “undermine the historic hierarchy of human domination and control.” Do you see it this way?

This is what I mean by audacious! These ideas are bound to feel political and threatening to the status quo, but they are rooted in a very basic observation—that the separation of human and non-human life on earth creates a default relationship of exploitation or opposition. Our work suggests not only that we should question the exploitation, but that we should question the underlying separation itself. We don’t imagine this state of affairs will change overnight, but we want to show that another way is possible, a way that weaves us together with the natural world, that shows we are part of nature and not outside or above it.

What does making business more beautiful mean to you?

Beautiful means being audacious, questioning whether the status quo is sufficient. Being open to mindset shifts. Openness, compassion, thinking seven generations into the future. That’s beautiful to me.